File:Okami-EFBtoRam.jpg
EFB to RAM, showing the effect on 1080p resolution

EFB to Texture is inaccurate, freezing the effect and leaving a ghost image of the frame when effect was disabled on. However, the character can still move underneath the ghosting, and it gives a glimpse of what the game could look like without the effect. It is considerably clearer and nicer, akin to what it should look like on the higher resolution. By switching from EFB to RAM to EFB to Texture with careful timing and camera work, it is possible to create a partial work around for the ghosting, as outlined in this forum post. This is the best that is possible at present, however it requires effort and isn't permanent.

Painting the bridge or the river will not function without "Enable CPU access". However, with this enabled, Okami will crash as soon as you try to paint. You can skip the bridge scene, but the game requires painting for the river. This crash prevents the game from advancing. It should be noted that older builds were able to bypass this crash, but we were unable to bypass it in r7408. 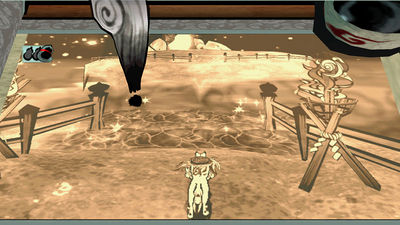