As of 3.0-732, Dolphin's main branch has BBA emulation support. However, in older builds it requires a Virtual Private Network (VPN) in order to function. BBA emulation is supported on OS X since 4.0-1390. Dolphin also supports BBA tunneling in 5.0-12233 or newer through the XLink Kai setting. This allows for playing LAN games online, but requires extremely low latency between the players.

In 5.0-16838 and newer, a HLE implementation exists that no longer requires a TAP adapter. Because it does not require a TAP adapter, it also works on Android devices (implemented in 5.0-16967) and is cross compatible between Desktop and Mobile builds.

How to use the BroadBand Adapter

Unlike the other BBA options which require a TAP or third party programs, the Built In BBA option's configuration is the same on all operating systems, including Android.

The Built In BBA option skips a lot of the more difficult and involved steps that were needed in order to use BBA emulation. The trade-off is that, by forwarding everything to the local network, you can only run one BBA instance per device when running LAN games. The only thing you need to do is enable the device under Config > GameCube > SP1, select Broadband Adapter (Built In) 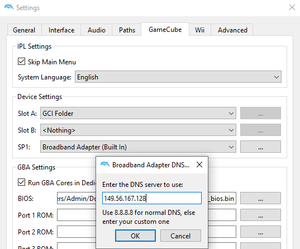 Example of the built-in BBA with its default settings.

If two or more devices are on the same network and using the Built-in BBA setting for LAN, the method to connecting is simple.

If two devices can't see each other, it's possible that you may need to reset the DNS for unknown reasons. Currently, Kirby Air Ride is not supported on Built-in BBA due to a bug.

The Built-in BBA can also be used with Phantasy Star Online I + II and I + II+. The default setting for the DNS points to the schthack server. For more information on how to register, please check out their website.

Note that TAP adapters on Windows are slower than on Linux, resulting in lag and performance issues in games. This can be combatted by increasing the emulated CPU clock, which has the games send the BBA faster and gives the networking a little extra time to handle things.

Install OpenVPN from your distribution package manager, then run the following commands (as root) to create the virtual interface and bridge it to your physical Ethernet adapter:

Dolphin supports multiple bridge interfaces so you'll be able to bridge multiple Dolphin instances together on the same system. Dolphin on Linux currently supports up to 32 bridges and will attempt to connect to bridges labelled from Dolphin0 to Dolphin31 sequentially until one succeeds or they all fail to connect to. Be careful with this, since if you attempt to use multiple Dolphin instances using the same broadband MAC address then games will encounter issues. For an example of how to bridge two Dolphin instances together and have two games like Mario Kart: Double Dash play with each other.

You'll also need to change your network settings to configure IP/gateway on br0 instead of the real adapter. The IP address of the real adapter must be set to 0.0.0.0. Linux doesn't support adding a wireless interface to a bridge as of July 2012 so you need a wired NIC for that to work.

In case you still want to use a Wi-Fi network for connecting, there is the option to create another tunnel-interface over a UDP connection across the Wi-Fi network:

The created interface tap-dolphin can then be used to add to the br0 bridge instead of eth0. This only works if the bridge br0 interface is set to promiscuous. The game expects a DHCP server to provide a suitable IP address on one of the participating machines, like:

NOTE: There is no encryption for the tunnel. Read the OpenVPN manpage for setting up the tunnel with encryption and/or authentication.

This will create a permanent bridge with your Dolphin tun and Ethernet devices. Replace eth0 with your actual network interface.

Now deactivate the active connection (usually something called "Wired connection 1") and the bridge will complete.

Adding a wireless interface is possible but it's done slightly different. Replace 'ssidname' and 'password' with the actual values for your wireless network. The single quotes around password are important so make sure to keep them.

Install the TUN/TAP kext files, then install OpenVPN from your distribution package manager. Run this command to move the OpenVPN alias:

Since Dolphin and OpenVPN needs access to /dev/tap0 and /dev/tap1, it must be owned by the current user:

NOTE: In the kext file for tap and tun, it will automatically make /dev/tap0 and /dev/tap1 owned by the root when the computer restarts.

Dolphin and the OpenVPN network cannot communicate with each other until there is a network bridge created:

Once both computers are connected, add tap1 to the network bridge.

After launching the game in Dolphin, make sure the log is on and the log type is set to SP1. When the log shows: "BBA Initialized," add tap0 to the bridge.

NOTE: There is no encryption for the tunnel. Read the OpenVPN manpage for setting up the tunnel with encryption and/or authentication.

As of 5.0-12233, Dolphin supports BBA tunneling through XLink Kai. Up to date instructions can be found on XLink Kai's Wiki Page.

By clicking on "...", you can either change the MAC Address (TAP) or the IP Address (XLink Kai).

Now you may play any games which use the BBA.