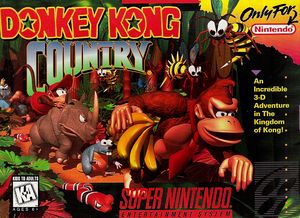 Donkey Kong Country is a platforming game developed by Rare Ltd, featuring Donkey Kong, one of Nintendo's iconic mascots. You must traverse through the vast jungles, deep mines, and high mountains to retrieve your stolen banana hoard from King K. Rool. Travel through each unique levels with the help of Diddy Kong, and other members of the Kong crew along the way. Earn support and play as different animals such as Rambi the Rhino, Enguarde the Swordfish, and a cast of other odd characters. Donkey Kong Country also features revolutionary pre-rendered 3D graphics and tag-team multiplayer. It has spawned four sequels throughout Nintendo consoles, and even a short TV series in 1996. The critically acclaimed game sold over nine-million copies, making it the second best-selling SNES of all time.

Problems that may occur with any Super NES title on Dolphin are listed below.

Sound is glitched in the OpenAL backend. Use XAudio2 to prevent this. Fixed in 5.0-798.

The graph below charts the compatibility with Donkey Kong Country since Dolphin's 2.0 release, listing revisions only where a compatibility change occurred.

Δ
5.0-13100 (current)
Δ
Δ
Δ
Δ
Δ
2.0 (r5384)
Compatibility can be assumed to align with the indicated revisions. However, compatibility may extend to prior revisions or compatibility gaps may exist within ranges indicated as compatible due to limited testing. Please update as appropriate.