Mario makes his debut on the Nintendo GameCube with Super Mario Sunshine. On a vacation away from the Mushroom Kingdom, Mario finds himself in a messy situation on the island of Delphino, where a Mario look-alike has been causing all kinds of trouble. Explore huge 3D environments that range from a lush waterfall paradise, to an exciting amusement park complete with a rollercoaster you can ride. Mario makes use of a new water pack, which allows him to hover, launch, and rocket around levels, as well as spray enemies with. Mario has never had so many cool new moves, or looked so good in 3D.

Opening the map causes the game to slow massively until the transition effect is complete. There are no lingering effects after the map is open or closed, just the transition. Switching to OpenGL or Vulkan backend removes the slowdown.

If certain Action Replay codes are activated, then the game may crash upon trying to return to a completed level. This has been confirmed with a "Press B to run fast" code. To solve the problem, simply disable the code.

Super Mario Sunshine reads the mip level of the sand to change the color of the water slightly in the distance. This effect cannot be detected by Arbitrary Mipmap Detection normally, as the sand is just a standard mipmap, so at higher internal resolutions the ocean will appear a bit greener. The effect is very subtle, and may not even be visible on your monitor, depending on its color reproduction capability.

Adding ArbitraryMipmapDetectionThreshold = 3 (this value was determined empirically) to the [Video_Enhancements] section of the GameINI will make this effect work at higher internal resolutions, by causing the sand texture to be detected as an arbitrary mipmap. However, this will make the sand a few other random textures appear more blurry in the distance. Using any HiRes texture for the sand will prevent the effect from working. 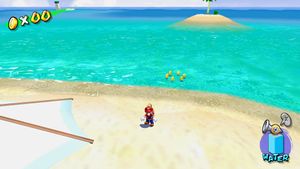 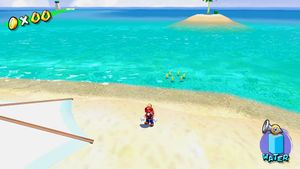 Use of the Anisotropic Filtering enhancement will cause water to render as white, getting increasingly worse as higher levels of anisotropic filtering are applied. Fixed with Arbitrary Mipmap Detection in 5.0-5745. 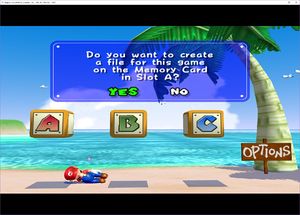 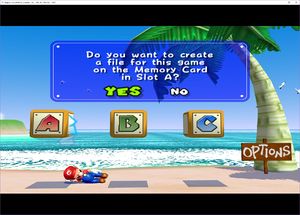 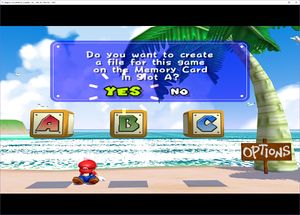 The built-in Widescreen Hack causes various clipping and reflection issues. The Gecko codes below work as a replacement for the NTSC-U or PAL versions. These codes can have adverse effects on the games heat distortion effect.

Remove falling stars caused by 60FPS code by applying Minimum Camera Distance Gecko code by Ralf. However, this code may cause other issues, specifically with the roller-coaster in Pinna Park. When loading this specific level (for example, just after the cutscene with Mecha-Bowser), the screen goes black and nothing more happens.