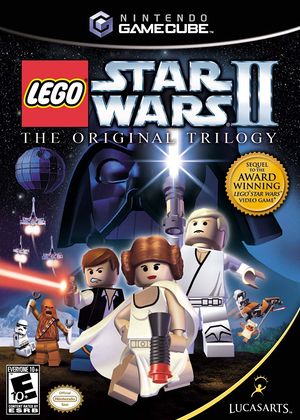 Lego Star Wars II: The Original Trilogy is a multi-platform action-adventure video game developed by Traveller's Tales and published by LucasArts and TT Games. It was released on September 11, 2006. Part of the Lego Star Wars series, it is based on the Star Wars science fiction media franchise and Lego Group's Star Wars-themed toy line. It follows the events of the Star Wars films A New Hope, The Empire Strikes Back and Return of the Jedi. The game allows players to assume the roles of over 50 Lego versions of characters from the film series; customized characters can also be created. Camera movement was improved from its predecessor.Lego Star Wars: The Video Game.and the concept of "vehicle levels" was explored more thoroughly. The game was revealed at American International Toy Fair 2006. Promotions for the game were set up at chain stores across the United States.

Lego Star Wars II was critically and commercially successful; it has sold over 8.2 million copies worldwide as of May 2009. Critics praised the game for its comedic and "adorable" portrayal of the film series and for their preference of the original trilogy to the prequel trilogy. However, the game's low difficulty, and its Game Boy Advance and Nintendo DS versions in general, were received more poorly. The game received awards from the British Academy of Film and Television Arts and Spike TV, among others. A mobile phone adaptation was later developed by Universomo, published by THQ, and released on December 19, 2006. Lego Star Wars and Lego Star Wars II were compiled in Lego Star Wars: The Complete Saga, released on November 6, 2007.The Mac OS X version of the game was released on April 2007 by Feral Interactive.

The graph below charts the compatibility with Lego Star Wars II: The Original Trilogy since Dolphin's 2.0 release, listing revisions only where a compatibility change occurred.

3.0
Δ
5.0-11825 (current)
Δ
Δ
Δ
Δ
Δ
2.0 (r5384)
Compatibility can be assumed to align with the indicated revisions. However, compatibility may extend to prior revisions or compatibility gaps may exist within ranges indicated as compatible due to limited testing. Please update as appropriate.