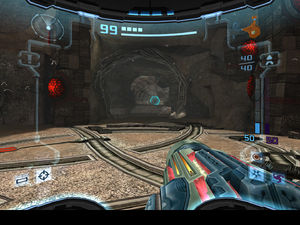 Like many games, to optimize performance, objects outside view are not rendered (this is called "frustum culling"). In 16:9, you can see culling on the sides of the screen (because you see more than what you are supposed to). The AR code below disables culling entirely. While culling won't be seen, this can affect the performance of the game. Use the following code along with the Dolphin Widescreen Hack.

Disable the Widescreen hack before using.

This graphics hack can be enabled for the PAL release of Metroid Prime 1 and 2 for Gamecube to reduce input latency. NTSC releases will crash when launching the game with the setting enabled.