Monster Mayhem: Build and Battle is a fighting game which was released in 2009.

When the HUD scroll off screen, it doesn't go all the way, showing it's top at the bottom of the screen. This also occurs on the Wii, though is likely typically cut-off due to overscan. See issue 9202. 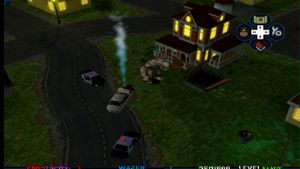 When taking a picture of your monster after it's creation for it's portrait, Store External Frame Buffer (XFB) to Texture Only must be disabled in order for portraits to show up correctly. Refer issue 10760. Fixed with 5.0-9234.

The graph below charts the compatibility with Monster Mayhem: Build and Battle since Dolphin's 2.0 release, listing revisions only where a compatibility change occurred.

4.0.2
Δ
5.0-15586 (current)
Δ
Δ
Δ
Δ
Δ
2.0 (r5384)
Compatibility can be assumed to align with the indicated revisions. However, compatibility may extend to prior revisions or compatibility gaps may exist within ranges indicated as compatible due to limited testing. Please update as appropriate.