Nerf: N-Strike Elite will feature a classic rail shooter style of gameplay and equip players with a cache of fresh features. With the Wii-remote snapped into the Nerf Switch Shot Ex-3 blaster and the red reveal lens engaged, players will be able to detect enemy weak spots, solve puzzles and decode secret messages as they blast their way to victory. Boys in the target age range of 8 to 12 will jump into battle as one of four playable characters, each with their own unique customizable blasters and abilities. For those players who find themselves in a melee that requires back-up, Nerf 2: N-Strike Elite will include two-player co-op, allowing buddies to immediately jump in and join the crusade. Players will also interact with a veritable army of robots including B.O.B., the same recruiting robot from the first Nerf N-Strike game.

In order to see certain enemies/puzzles, the gun that comes with the game has a red film you can look through to reveal them on screen. In Dolphin, you can actually use post processing shaders to get around this, such as Spookey1. 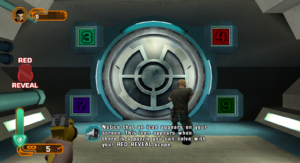 The Puzzle Isn't easily solved without the attachment. 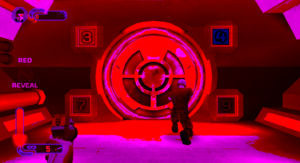 It's easy enough to see which one stands out with some post processing shaders.

The graph below charts the compatibility with Nerf N-Strike Elite since Dolphin's 2.0 release, listing revisions only where a compatibility change occurred.

4.0-8400
Δ
5.0-17984 (current)
Δ
Δ
Δ
Δ
Δ
2.0 (r5384)
Compatibility can be assumed to align with the indicated revisions. However, compatibility may extend to prior revisions or compatibility gaps may exist within ranges indicated as compatible due to limited testing. Please update as appropriate.