Xenoblade Chronicles, known in Japan as Xenoblade (ゼノブレイド, Zenobureido), is a console role-playing game, and the first of the Xeno series to make it to a Nintendo console. Originally not intended to be released in North America, a massive fan movement called Operation Rainfall convinced Nintendo to publish it in more regions.

The game follows a young man named Shulk, who wields the titular Xenoblade – an energy blade called the Monado – against the Mechon in order to ultimately save the world. The game world is designed to give the feeling of freedom and scope to the player; the environment is massive and most of it is available for exploration right from the start. Xenoblade uses a real time battle system, allowing the player to control his movement and attacks at will while party members attack automatically.

Xenoblade Chronicles is one of the most susceptible titles to shader compilation stuttering. The GC and Wii have no concept of shaders - everything is executed directly by the hardware without an intermediate programming language (API). Modern computers and mobile systems do not work in this way, requiring the use of shaders as an intermediary so your system's GPU can perform the tasks that the GC and Wii GPU performed directly. Shaders have to be generated though, and since GC/Wii games are not designed to create shaders ahead of time as a PC game would, when a new effect appears Dolphin has to delay the CPU thread while the GPU thread performs the compilation; a pause that does not exist on the consoles. For most games shader generation takes only a few milliseconds, but for a few demanding titles, the shaders that they generate are so large that they can result in noticeable stuttering, in severe cases pauses of over a second may occur.

When saving/loading game, screenshots next to a save file will not show correctly. Disable EFB Copies to Texture Only to fix this.

With D3D, the sky in Makna Forest is glitched, as the ocean texture from the above area is flickering through. Use OpenGL, Vulkan or disable Fast Depth Calculation to prevent this from happening.

In 5.0-683 or newer, the game will crash randomly (though somewhat infrequently) with an invalid opcode due to GPU desynchronization caused by incorrect interrupt timings. This affects both dual core and single code mode, no matter what settings are used. This issue is questionable. Please refer to Xenoblade Compatibility Downgrade for further information until it's fully resolved.

When using IR > 1x bloom effects in this title are rendered incorrectly. This can be accounted for with one of the following Gecko codes. Choose one code near the IR you use. If you use an unlisted IR, then it's okay to choose something close to it but not exact (choose x4 or x8 if you're running x6 IR). More details can be found on the Dolphin Forums. 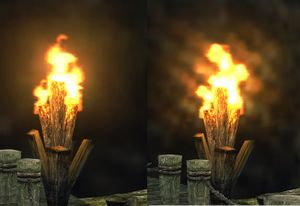 See the Xenoblade Chronicles HD Expansion Pack. This project aims to get as many textures converted to HD as possible. There are also packs to replace the button icons with HD versions for the Wii Remote, Classic Controller, Xbox360, and PlayStation with HD tutorials that utilize these buttons. The texture pack has full support for all game disc versions.

Add this Gecko Code to the game config (Right-click on the game → Properties → Edit Config, paste into the [Gecko] section)

This will unlock 60 FPS mode for everything but movies. You might be forced to overclock the emulated CPU (Options → Configuration → Advanced). Battles may need about a 125% overclock. Discuss at the 60fps development thread

This game was designed for 16:9 only display resulting in black borders to be added on the top and bottom, but using the Gecko codes below will add support for the standard aspect ratio based on the Wii settings.

The graph below charts the compatibility with Xenoblade Chronicles since Dolphin's 2.0 release, listing revisions only where a compatibility change occurred.

r6880
5.0-683
5.0-4869
Δ
5.0-13495 (current)
Δ
Δ
Δ
Δ
Δ
2.0 (r5384)
Compatibility can be assumed to align with the indicated revisions. However, compatibility may extend to prior revisions or compatibility gaps may exist within ranges indicated as compatible due to limited testing. Please update as appropriate.