Players start out in Fishing Resort (Family Fishing in Japan) by customizing their own unique character, and can choose to make a cartoon-style character of themselves, or someone entirely different. Add in over 200 items such as shoes, clothes, sunglasses, backpacks, hats and much more, and each player is given the tools to create an entirely unique character with which to explore the island. Fishing is accomplished by mimicking real-life fishing motions using the Wii Remote to cast and moving the Nunchuk in a circular motion to reel in fish, which range from pond guppies to massive marlins over 10-feet in length! 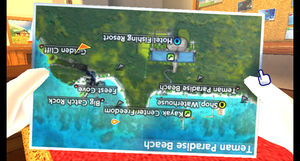 4.0-8342
5.0-568
Δ
5.0-18491 (current)
Δ
Δ
Δ
Δ
Δ
2.0 (r5384)
Compatibility can be assumed to align with the indicated revisions. However, compatibility may extend to prior revisions or compatibility gaps may exist within ranges indicated as compatible due to limited testing. Please update as appropriate.