Amazing Island (aka Kaijuu no Shima: Amazing Island (カイジュウの島 ～アメージングアイランド～) in Japan) is a minigame collection with a well developed avatar creator. Your character is a Boy or Girl and their monster partner. By completing courses they gain Vision Orbs, which drives off the Black Evil, restores portions of the Island, and gain new abilities and items to customize their monster partner. The further in game, the more difficult the challenges are until the Black Evil itself is confronted. Upon purging the whole Island of Evil the villagers and the player hold a celebration. 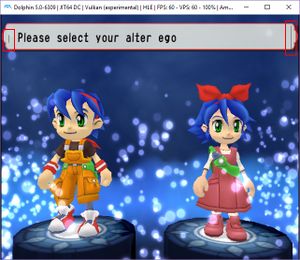 The Widescreen Hack results in clipping and water rendering problems. The following Gecko code will render in 16:9 more appropriately.

The graph below charts the compatibility with Amazing Island since Dolphin's 2.0 release, listing revisions only where a compatibility change occurred.

4.0-8176
Δ
5.0-18505 (current)
Δ
Δ
Δ
Δ
Δ
2.0 (r5384)
Compatibility can be assumed to align with the indicated revisions. However, compatibility may extend to prior revisions or compatibility gaps may exist within ranges indicated as compatible due to limited testing. Please update as appropriate.