Amazon Instant Video, Amazon LOVEFiLM Channel in Europe is an Internet video on demand service offered by Amazon.com in the United States. It offers television shows and films for rental and purchase.

This channel has been shut down as of January 30, 2019 and works in neither Dolphin or on Wii hardware.

This channel will crash in a black screen on boot if MMU emulation is not enabled. Enabled by default in the game ini since at least 5.0-10000.

Upon starting, Amazon Instant Video Channel will stop on an error message claiming there's not enough free space on the Wii NAND. Fixed in 5.0-3147. 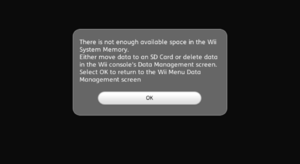 The graph below charts the compatibility with Amazon Instant Video Channel since Dolphin's 2.0 release, listing revisions only where a compatibility change occurred.

2.0
5.0-2127
Δ
5.0-18498 (current)
Δ
Δ
Δ
Δ
Δ
2.0 (r5384)
Compatibility can be assumed to align with the indicated revisions. However, compatibility may extend to prior revisions or compatibility gaps may exist within ranges indicated as compatible due to limited testing. Please update as appropriate.