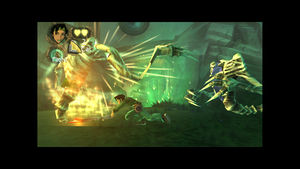 Loading screen render pink unless Store XFB Copies to Texture Only is disabled.