In Casper's Scare School: Spooky Sports Day it's sports day in the Underworld and various exciting sporting events are taking place around the grounds of Scare School. Join Casper and his friends in a variety of challenging and fun games and see who's going to be the sporting champion!

Disc Could Not Be Read

By default, the game will display the message "The disc could not be read. Refer to the Wii Operations Manual for details." and will not boot because of missing dcache emulation. Refer issue 10927.

To avoid this problem, enable "Fix file reads (dcache bypass)" in the Patches tab of the game properties. This hack was added for the NTSC-U version in 5.0-6404 and for the PAL version in 5.0-10106 and is now applied by default. 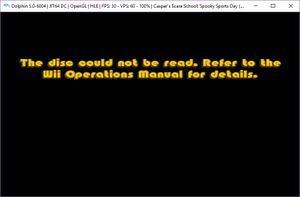 The disc could not be read.

The graph below charts the compatibility with Casper's Scare School: Spooky Sports Day since Dolphin's 2.0 release, listing revisions only where a compatibility change occurred.

r1.0
5.0-6404
Δ
5.0-18410 (current)
Δ
Δ
Δ
Δ
Δ
2.0 (r5384)
Compatibility can be assumed to align with the indicated revisions. However, compatibility may extend to prior revisions or compatibility gaps may exist within ranges indicated as compatible due to limited testing. Please update as appropriate.