Cel Damage is a cartoony take on vehicular combat games like Twisted Metal. The story focuses on six cartoon characters from a fictional cartoon show called "Cel Damage". The characters annihilate each other to the delight of TV audiences and, since they are cartoons, instantly regenerate. The player battles through twelve different levels and three game modes. Weaponry for Cel Damage includes cartoon staples like vacuum nozzles and portable holes, mundane weaponry like chainsaws and baseball bats, and items like freeze rays, giant springs, and portable nuclear devices.

When using the game's default graphical setting, Cartoon Render, Dolphin renders textures and lighting in Cel Damage incorrectly. However, the unlockable Plastic Render setting emulates like how it would on a console. Refer issue 4364, fixed in revision 5.0-5934 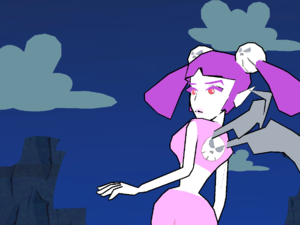 A scene from the main intro, using the Cartoon Render setting. 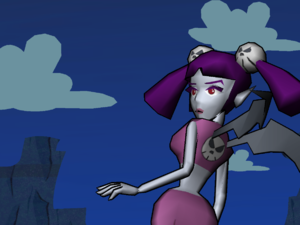 A scene from the main intro, using the Plastic Render setting.

The graph below charts the compatibility with Cel Damage since Dolphin's 2.0 release, listing revisions only where a compatibility change occurred.

3.0-376
4.0-3933
Δ
5.0-18491 (current)
Δ
Δ
Δ
Δ
Δ
2.0 (r5384)
Compatibility can be assumed to align with the indicated revisions. However, compatibility may extend to prior revisions or compatibility gaps may exist within ranges indicated as compatible due to limited testing. Please update as appropriate.