In Cyber Sled maneuvere a hovercraft style tank through a futuristic arena and fighting to eliminate an opponent (either another player or the computer). Various power-ups are available throughout the game, which feature improved radar, extra missiles, and shield re-charging. There are walls and other obstacles in the arena, which can be useful for hiding as well as a hindrance, and some of which can be destroyed.

This title requires Ignore Format Changes enabled. This is set by default in 5.0-8953. 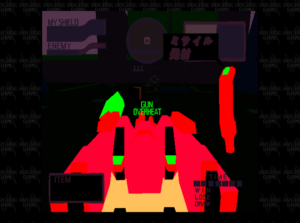 The graph below charts the compatibility with Cyber Sled since Dolphin's 2.0 release, listing revisions only where a compatibility change occurred.

Δ
5.0-18501 (current)
Δ
Δ
Δ
Δ
Δ
2.0 (r5384)
Compatibility can be assumed to align with the indicated revisions. However, compatibility may extend to prior revisions or compatibility gaps may exist within ranges indicated as compatible due to limited testing. Please update as appropriate.