Geist is a video game for the Nintendo GameCube video game console. A prototype of the game was developed by n-Space, who approached Nintendo to be the game's publisher. Nintendo accepted, making Geist the second GameCube game published by Nintendo to receive an M-rating (the first being Eternal Darkness: Sanity's Requiem). In the following years, Nintendo and n-Space worked closely on Geist. The game was first shown at the E3 2003 and was announced to be part of the GameCube's line-up for 2003. However, it was delayed for two years for fine-tuning. During that time, the game's genre changed from first-person shooter to first-person action-adventure.

The Geist franchise is currently owned by Nintendo, due to their contract with n-Space. At the moment, there are no plans for a sequel. However, n-Space has announced they are working on a game for the Wii.

Geist has a native 16:9 display option, but it requires enabling it in its internal options and setting Dolphin's Aspect Ratio graphics setting to "Auto". Using the widescreen hack with this title is not recommended. 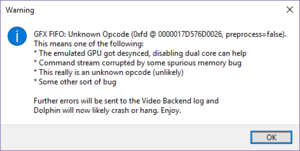 The graph below charts the compatibility with Geist since Dolphin's 2.0 release, listing revisions only where a compatibility change occurred.