The Hollywood Squares game features all the favorite elements of the TV show as 2 contestants play head-to-head in a bid to win money and prizes. Nine cubes make up the tic-tac-toe style board, occupied by Center Square celebrities Martin Mull, Kathy Griffin, Jeffrey Tambor or Brad Garett. Celebrities are asked questions and reply via hilarious video footage from the TV show. Players judge whether answers are true or false, all the while incorporating outrageous zingers to fuel fun. A correct answer earns the player a square on the board- the first player to mark 3 squares in a row wins!

To fix, load up the Wii System menu and set the Country to any NTSC region country (all listed countries in the NTSC System Menu will be NTSC countries.) 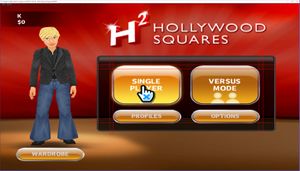 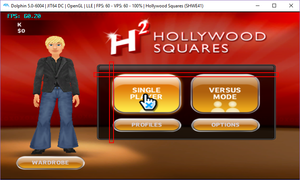 Can be made to match Real Wii behavior by using `Manual Texture Sample`.

The software renderer does not have correct XFB emulation for this game, causing the top half of the screen to be rendered in both fields. Refer issue 10694.

With default settings this game will flicker constantly. Set the External Frame Buffer on and set it to Virtual to fix it. Fixed with Hybrid XFB in 5.0-5874.

The graph below charts the compatibility with Hollywood Squares since Dolphin's 2.0 release, listing revisions only where a compatibility change occurred.

Δ
5.0-18505 (current)
Δ
Δ
Δ
Δ
Δ
2.0 (r5384)
Compatibility can be assumed to align with the indicated revisions. However, compatibility may extend to prior revisions or compatibility gaps may exist within ranges indicated as compatible due to limited testing. Please update as appropriate.