Take control of the ship Ikaruga -- alter your energy field, evade epic maelstroms of fire and terminate enemies with a nearly limitless arsenal -- all to protect an aging, exiled people. Find calm amid the chaos and reap the rewards, in this perfect combination of beautiful, manga-style storytelling and refined, ultra-challenging arcade heroics. As pilot Shinra, players must battle their way through 18 stages, move swiftly and act rationally in a new war, a space crusade of frighteningly intense firepower and hypnotic beauty. Developed by Treasure, Ikaruga is quick-paced shooter with strong strategy elements. Features a slow-mo training mode and co-op play for two.

If Safe Texture Cache is not used enemy fire may not match their polarity. Fixed sometime before 5.0-3965. 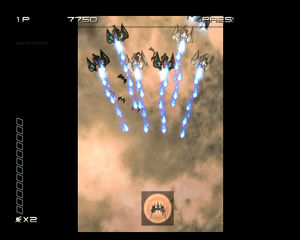 In the principal story mode sound may drop out. Fixed sometime before 5.0-3965.

r6421
Δ
5.0-18210 (current)
Δ
Δ
Δ
Δ
Δ
2.0 (r5384)
Compatibility can be assumed to align with the indicated revisions. However, compatibility may extend to prior revisions or compatibility gaps may exist within ranges indicated as compatible due to limited testing. Please update as appropriate.