Since at least 5.0, while in menus, each text character will have a faint black border around it. There is no known solution. See issue 10751. 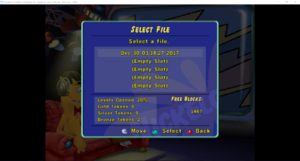 The graph below charts the compatibility with Nickelodeon Party Blast since Dolphin's 2.0 release, listing revisions only where a compatibility change occurred.

4.0-5152
5.0-6092
Δ
5.0-18515 (current)
Δ
Δ
Δ
Δ
Δ
2.0 (r5384)
Compatibility can be assumed to align with the indicated revisions. However, compatibility may extend to prior revisions or compatibility gaps may exist within ranges indicated as compatible due to limited testing. Please update as appropriate.