The Nintendo Channel (also known as the Everybody's Nintendo Channel in Japan) allows Wii users to watch videos such as interviews, trailers, commercials, and even download demos for the Nintendo DS. In this capacity the channel works in a similar way to the DS Download Station. The channel provides games info pages and users can rate games that they have played. A search feature is also available to assist users in finding new games to try or buy. The channel has the ability to take the user directly into the Wii Shop Channel for buying the wanted game immediately. The Nintendo Channel was launched in Japan on November 27, 2007, in North America on May 7, 2008, and in Europe and Australia on May 30, 2008. The Nintendo Channel is updated with different Nintendo DS demos and new videos every week; the actual day of the week varies across different international regions.

An updated version of the Nintendo Channel was released in Japan on July 15, 2009, North America on September 14, 2009, and in Europe on December 15, 2009. The update introduces a new interface and additional features, options, and statistics for users to view. However, the European version is missing some of these new additional features, such as options for choosing video quality. In addition, a weekly show known as Nintendo Week began airing exclusively on the North American edition of the channel, while another show Nintendo TV, is available on the UK version of the channel.

This channel's online functionality has been shut down as of June 28, 2013 and works in neither Dolphin or on Wii hardware.

The RiiConnect24 service can restore the Nintendo Channel functionality, but doesn't support Dolphin yet. Refer issue 10200 and see their site for details.

The "Nintendo Channel" Lettering that appears shortly after starting the channel is not being displayed correctly in Dolphin. In Dolphin, the Letters are displayed only halfway. Refer issue 12562.

Dolphin: Letters are displayed only halfway.

Console: All Letters are completely visible.

After the initial setup, the channel will stop on a black screen complaining about a corrupt system file. This apparently has something to do with the lack of WiiConnect24 support in Dolphin. Refer issue 10200. Fixed by 5.0-17613. 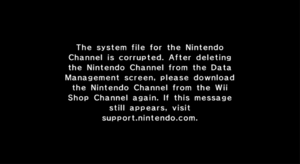 The graph below charts the compatibility with Nintendo Channel since Dolphin's 2.0 release, listing revisions only where a compatibility change occurred.

4.0
5.0
Δ
5.0-18431 (current)
Δ
Δ
Δ
Δ
Δ
2.0 (r5384)
Compatibility can be assumed to align with the indicated revisions. However, compatibility may extend to prior revisions or compatibility gaps may exist within ranges indicated as compatible due to limited testing. Please update as appropriate.