In Schlag den Raab you can get a taste of the original TV atmosphere and feel how you feel as a selected candidate in Germany's most popular TV show. Compete against the all-rounder Stefan Raab and try to defend against his ambition and will to win. A game mix of skill, knowledge and action decides about victory or defeat. Put your general knowledge to the test in the popular "Shame or Cashier" quiz, test your geography skills in "Where's What", skillfully use the Wii Remote (Wii) for the "Pömpel Game" or compete with Raab in "milking cow"!

21 mini-games, as they can not be more varied, are available to choose from. A pool of over 2,000 questions ensures that the trivia games pose you with new challenges again and again. A duel mode for up to four players guarantees long-lasting party evenings according to the concept of TV broadcast with Open End...

Text is not readable in the menu. To fix, change the Texture Cache Accuracy to Safe. Refer issue 10705. 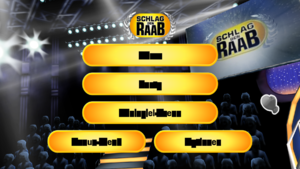 5.0-1066
Δ
5.0-15413 (current)
Δ
Δ
Δ
Δ
Δ
2.0 (r5384)
Compatibility can be assumed to align with the indicated revisions. However, compatibility may extend to prior revisions or compatibility gaps may exist within ranges indicated as compatible due to limited testing. Please update as appropriate.