Super Swing Golf, known in Europe as PangYa! Golf With Style and in Japan as Swing Golf PangYa, is a Wii version of the online golf game, PangYa. It was followed by a sequel, Super Swing Golf Season 2.

Sometimes image tiles seem to be rendered 1px off, leaving small gaps or improperly drawn tile edges. This occurs even with 1x Internal Resolution and Anisotropic Filtering / Anti-aliasing off. Refer issue 6833. This is due to various texture interpolation issues and may happen on a real Wii. This may not occur with PAL releases. Running the game at 1x Internal Resolution will fix this issue.

At some point, an optimization introduced to the JIT made it so the golf course stopped rendering. In order to work around the problem, enable FPRF in the game properties page. Fixed since at least 5.0-12665. 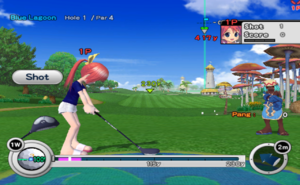 The graph below charts the compatibility with Super Swing Golf since Dolphin's 2.0 release, listing revisions only where a compatibility change occurred.

3.5
Δ
5.0-13169 (current)
Δ
Δ
Δ
Δ
Δ
2.0 (r5384)
Compatibility can be assumed to align with the indicated revisions. However, compatibility may extend to prior revisions or compatibility gaps may exist within ranges indicated as compatible due to limited testing. Please update as appropriate.