X-Men Legends is an action role-playing game released on several consoles in 2004. Players can play as one of 15 X-Men characters, switching between four computer (or human) controlled characters within one team. The basic plot revolves around the X-Men battling Magneto and the Brotherhood of Mutants.

In post version 5.0 build(s) of Dolphin the game leads to a GameCube error screen after only 8-9 minutes. Apparently resolved prior to 5.0-6092.

These codes cause text to stretch outside of UI elements. 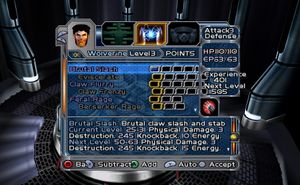 The graph below charts the compatibility with X-Men Legends since Dolphin's 2.0 release, listing revisions only where a compatibility change occurred.