When using the MS Bluetooth Stack (the default Bluetooth stack on Windows) the game will think that the Wii Remote is constantly disconnecting. Pressing a button on the Wii Remote will restore it, but it will disconnect again seconds later. Disable Enable Speaker Data to remedy this problem. It's a problem bound to PC hardware and driver, you can also try Bluetooth Passthrough, or follow this Wii Remote -TR Connection Guide anyhow to avoid the MS Bluetooth stack. DolphinBar is another viable solution for this problem. 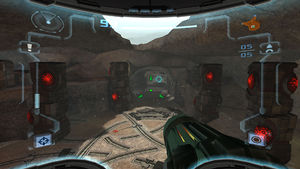 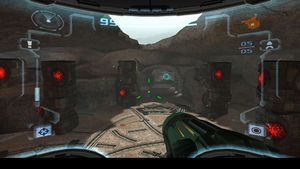 When playing above 1x Native internal resolution, there is a dot in the center of the screen. It's small and easy to ignore, but it's always there. It can be hidden along with the helmet and visor display in the game's options.

Another workaround for this problem is to put these custom textures into the Dolphin Emulator\Load\Textures folder and enabling the Load Custom Textures option in the advanced graphics settings.

The Dot, zoomed in 8x

r7689
5.0-4869
Δ
5.0-15920 (current)
Δ
Δ
Δ
Δ
Δ
2.0 (r5384)
Compatibility can be assumed to align with the indicated revisions. However, compatibility may extend to prior revisions or compatibility gaps may exist within ranges indicated as compatible due to limited testing. Please update as appropriate.