Prince of Persia: Warrior Within

Prince of Persia: Warrior Within is a video game and sequel to Prince of Persia: The Sands of Time. It picks up where The Sands of Time left off, adding new features, specifically, options in combat. The Prince now has the ability to wield two weapons at a time as well as the ability to steal his enemies' weapons and throw them. The Prince's repertoire of combat moves has been expanded into varying strings that allow players to attack enemies with more complexity than was possible in the previous game. Warrior Within has a darker tone than its predecessor adding in the ability for the Prince to dispatch his enemies with various finishing moves. In addition to the rewind, slow-down, and speed-up powers from The Sands of Time, the Prince also has a new sand power: a circular "wave" of sand that knocks down all surrounding enemies as well as damaging them. The dark tone, a vastly increased level of blood and violence as well as sexualized female NPCs earned the game an M ESRB rating.

This title has various sound issues, including stuttering after unlocking abilities, missing dialogue, and music dropping out. This also happens on real hardware. See issue 10831.

As of 5.0, in certain segments, particle effects can break and instead display as giant red blocks. This can be avoided by checking "Disable Fog". See issue 10837. Fixed by 5.0-6259. 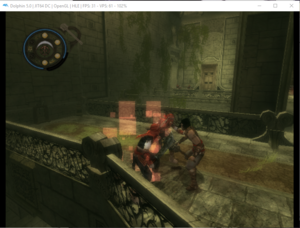 The graph below charts the compatibility with Prince of Persia: Warrior Within since Dolphin's 2.0 release, listing revisions only where a compatibility change occurred.

r7408
Δ
5.0-18426 (current)
Δ
Δ
Δ
Δ
Δ
2.0 (r5384)
Compatibility can be assumed to align with the indicated revisions. However, compatibility may extend to prior revisions or compatibility gaps may exist within ranges indicated as compatible due to limited testing. Please update as appropriate.