In WALL•E, race, fly and shoot as you take robots WALL•E and EVE through a fast-paced adventure. From the desolate wastelands of Earth to the Axiom space cruiser, throw cubes and avoid obstacles while you explore 9 worlds filled with non-stop action and adventure, along with multiplayer challenges. Dodge dangerous enemies, carry out intense missions and navigate your way through a futuristic galaxy!

Text can often appear garbled with missing letters, especially in menus but also in-game. This can be fixed by changing the "Texture cache accuracy" setting in (Graphics -> Hacks) to the leftmost setting (Safe). 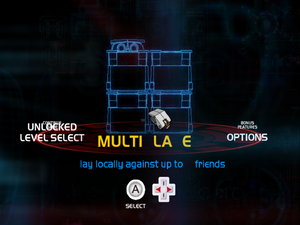 The graph below charts the compatibility with Wall•E since Dolphin's 2.0 release, listing revisions only where a compatibility change occurred.

3.0-763
Δ
5.0-15586 (current)
Δ
Δ
Δ
Δ
Δ
2.0 (r5384)
Compatibility can be assumed to align with the indicated revisions. However, compatibility may extend to prior revisions or compatibility gaps may exist within ranges indicated as compatible due to limited testing. Please update as appropriate.