Rayman 3: Hoodlum Havoc has a native 16:9 display option, but it requires enabling it in its internal options and setting Dolphin's Aspect Ratio graphics setting to "Auto". Using the widescreen hack with this title is not recommended. 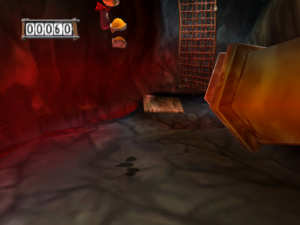 Rayman 3: Hoodlum Havoc's internal 16:9 aspect ratio option is flawed: some objects are not rendered on the sides from certain distances, no 2D elements are adjusted, and the game looks more squished than its developers intended. This Gecko code changes the game's horizontal width to accurately fill the GameCube's 16:9 area, matching the look of the other versions, adjusts any text to appear at the correct aspect ratio, as well as fixing any rendering issues.