Rhythm Heaven Fever, known in Europe as Beat the Beat: Rhythm Paradise and in Japan as Everybody's Rhythm Heaven (みんなのリズム天国, Minna no Rizumu Tengoku), challenges you to stay on the beat in a world of animations that are decidedly offbeat. The premise of Rhythm Heaven Fever is simple and the catchy style is irresistible. Use three basic button commands - A, B, or both - to keep the beat in clever challenges featuring a variety of hand-drawn animation styles. You'll discover rhythm in places you would never expect, with robot assembly lines, sword-wielding samurai, rolling peas you'll try and stab with a fork, and more. Complete challenges to unlock remixes and alternate versions, or join a friend in two-player mode for a two-person jam session.

The main Micro-Row level will not play properly, instead a frozen frame from the practice level will appear on-screen until the music is complete.

This can be fixed by either disabling "Store EFB copies to Texture Only" before or during the level, or changing the accuracy of the Texture Cache to any state once you see the frozen frame. Fixed since 5.0-12123. 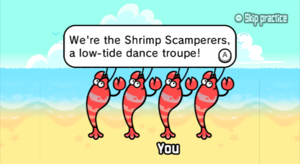 Notice the vertical lines in the sea and the sand 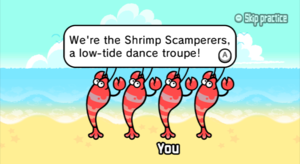 If Disable External Frame Buffer is checked, during the practice level for Micro-Row the screen will turn completely black randomly. To get around this, enable the external frame buffer or skip the practice level. Fixed with Hybrid XFB in 5.0-5874.

Rhythm Heaven Fever HD Edition by Gamerz The download links in the original post are expired, but it is still available via links posted by other users later in the thread (on the seventh page at the time of writing).

The graph below charts the compatibility with Rhythm Heaven Fever since Dolphin's 2.0 release, listing revisions only where a compatibility change occurred.

3.0
3.5-375
5.0-12123
Δ
5.0-17540 (current)
Δ
Δ
Δ
Δ
Δ
2.0 (r5384)
Compatibility can be assumed to align with the indicated revisions. However, compatibility may extend to prior revisions or compatibility gaps may exist within ranges indicated as compatible due to limited testing. Please update as appropriate.