In D3D (only on Windows 7 as of 5.0-5404), shadows may appear distorted or even be copied from other objects, such as Fox with an arwing shaped shadow while near the ship. Windows 7 does not support Direct3D 11.1's Windows Display Driver Model 1.2 preventing Dolphin's emulation of the related LogicOps functionality from working. Use OpenGL or Vulkan to avoid this issue. Windows 7 is no longer supported in Dolphin, therefore this issue is no longer relevant. 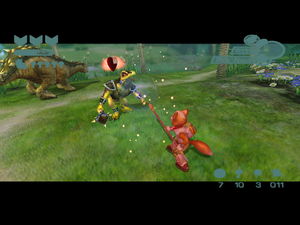 Star Fox Adventures was designed with the expectation of square pixels, which the GameCube doesn't have, so the game looks slightly slimmer than its developers intended: 4:3 mode is actually 5:4 and 16:9 mode is actually 15:9. This code increases the game's viWidth from its original 660 up to 704, allowing it to completely fill the 4:3/16:9 area.

r6106
Δ
5.0-17441 (current)
Δ
Δ
Δ
Δ
Δ
2.0 (r5384)
Compatibility can be assumed to align with the indicated revisions. However, compatibility may extend to prior revisions or compatibility gaps may exist within ranges indicated as compatible due to limited testing. Please update as appropriate.