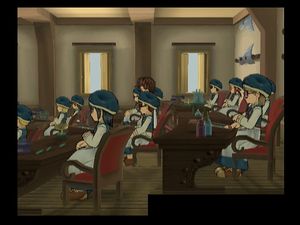 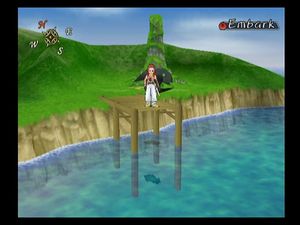 The opening FMV stutters even when being emulated at full speed. Setting the Emulated CPU Clock Override to 130% or more can work around the problem. Refer issue 7234.

When viewing a skit or when characters talk during in-game dialog, certain textures will not accurately update when the Texture Cache is set to Fast. During skits, character icons may not appear to be talking (mouths won't move). During in-game dialog, the mouth textures may not change when a character speaks. Setting the Texture Cache slider to Position 2 (Middle) resolves this issue. It is set by default in the GameINI, however opening the graphics configuration during play may cause the problem to reappear. Refer issue 10705. Fixed by 5.0-4171.

The game utilizes a blur technique as a "focus effect". During normal top-down gameplay, anything in the center of the screen is clear, but the edges are distorted and duplicated. If the camera angle moves down to the character's level, the effect becomes a distance blur. This is not a problem with Dolphin - this is an actual game effect that the developers intended and is present on console. But, at the higher resolutions Dolphin is capable of, it can be very annoying.

Use the following gecko codes to disable the effect. Applying it to Disc1 will also apply it to Disc2 since they share the same GameID. 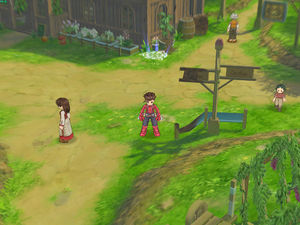 r667
3.5
3.5-135
Δ
5.0-18505 (current)
Δ
Δ
Δ
Δ
Δ
2.0 (r5384)
Compatibility can be assumed to align with the indicated revisions. However, compatibility may extend to prior revisions or compatibility gaps may exist within ranges indicated as compatible due to limited testing. Please update as appropriate.