The Netflix Channel allows Netflix subscribers to use that service's "Watch Instantly" movie streaming service over the Wii with their regular Netflix subscription fee. The channel is free to download in the Wii Channels section of the Wii Shop Channel. The channel displays roughly 12 unique categories of videos with exactly 75 video titles in each category. The TV category can have many seasons of videos (i.e. 15–100 episodes) associated with each title. There are also categories for videos just watched, new releases, and videos recommended (based on your Netflix subscription history).

This title has been shut down as of January 30, 2019 and works in neither Dolphin or on Wii hardware.

This channel will crash in a black screen on boot if MMU emulation is not enabled. Enabled in game ini since at least 5.0-10000.

Upon starting, Netflix Channel will stop on an error message claiming there's not enough free space on the Wii NAND. Fixed in 5.0-3147. 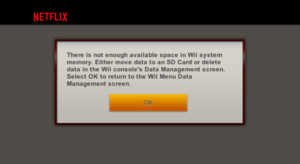 The graph below charts the compatibility with Netflix Channel since Dolphin's 2.0 release, listing revisions only where a compatibility change occurred.