Dolphin does not include the Wii Menu by default, and it doesn't need it; it is able to launch games straight from the Dolphin GUI. However, the menu is fully functional; it can load channels and even discs. Starting with 5.0-4588, you can easily install the Wii Menu in Dolphin by going into Tools => "Perform Online System Update". Additionally, starting with Dolphin 5.0-5179, the Wii Menu can also be installed offline from a Wii disc containing an update partition by right-clicking the game on Dolphin's game list and selecting "Perform System Update". Once installed it can be launched from Tools => "Load Wii System Menu".

The Screen Position Setting in the System Preferences has no effect in Dolphin. On Console, it moves the Position of the Screen either to the left or right by pressing the arrows in the desired direction. Refer issue 10984. 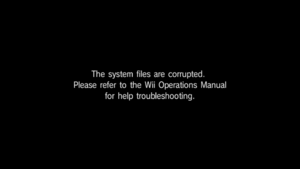 5.0-11518
Δ
5.0-18426 (current)
Δ
Δ
Δ
Δ
Δ
2.0 (r5384)
Compatibility can be assumed to align with the indicated revisions. However, compatibility may extend to prior revisions or compatibility gaps may exist within ranges indicated as compatible due to limited testing. Please update as appropriate.