At the beginning of the game, when the game asks if you want to go to the Calendar Screen, choosing Yes makes the game freeze. You can avoid this by simply selecting No instead. If you need to adjust the date and time, you can do so in your computer's settings, or if that is not possible, the Advanced tab of Dolphin's configuration.

When configuring a provider the game will error creating the network file in a GCI folder. Configure Dolphin to use a raw memory card file.

PSO EP1&2 and PSO EP3 tends to easily de-sync GPU/CPU threads when Dual Core is enabled (the default setting for most games on Dolphin) and since this game is constantly writing to your memory card while playing online there's a chance these de-syncs will happen while the game is writing to the memory card. This may result in game data corruption making you lose all your progress and characters. So to avoid this it's recommended to disable Dual Core for this game.

Texture cache accuracy must be set to Safe to avoid rendering some text incorrectly. Fixed by 5.0-16479. 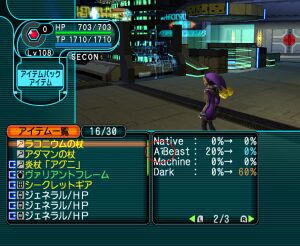 Scenes that play pre-rendered video appear black unless the External Frame Buffer is enabled and set to Real and Scaled EFB Copy is disabled. Setting the Internal Resolution to 1x reduces image shaking. Fixed with Hybrid XFB in 5.0-5874.

The graph below charts the compatibility with Phantasy Star Online Episode I & II Plus since Dolphin's 2.0 release, listing revisions only where a compatibility change occurred.

r7555
3.0-732
5.0-5874
Δ
5.0-18497 (current)
Δ
Δ
Δ
Δ
Δ
2.0 (r5384)
Compatibility can be assumed to align with the indicated revisions. However, compatibility may extend to prior revisions or compatibility gaps may exist within ranges indicated as compatible due to limited testing. Please update as appropriate.