If graphics settings are changed during a race, the map in the bottom right corner and Mii faces may disappear. The faces of the racers will still show up. This won't happen when Store EFB Copies to Texture Only is disabled.

In Coin Runners Mode, the Arena Map is rarely updated, if Texture Cache Accuracy is set to fast or medium. To fix, set it to safe. 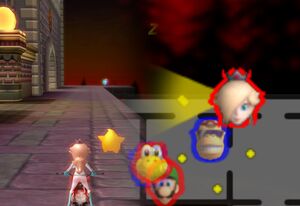 The WiiConnect24/RiiConnect24 features of this title cannot be used because Dolphin does not currently support them. Refer to issue 10200.

To properly display images pinned to the Wii Pinboard, Store XFB Copies to Texture Only must be disabled before the image is created.

This game does some weird depth based effects when rendering at PAL50. D3D11/12 do not handle this effect correctly. To fix, use OpenGL or enable PAL60 mode.

When disconnecting a gamepad that emulates a GameCube Controller, the game won't show a message about the disconnected controller, like it does when played on console. Refer to issue 11323.

Main Menu: Transparency of the Buttons is displayed incorrectly

After entering the Main Menu, small videos are played in the background on the buttons for the different Game Modes. Before they are loaded, the buttons are displayed transparently. This is displayed incorrectly in Dolphin. Refer to issue 11909. This has been fixed in 5.0-16012. 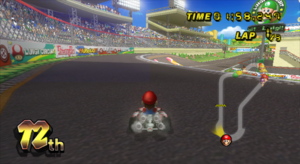 The Mario Kart Channel is not installed properly, even though the game indicates the install completed successfully. Partly fixed by 5.0-1837, which added initial title import support, but breaks the NAND when actually installing the channel. 5.0-2706 completely fixes the issue.

The red and green glow on the conveyor belts on Toad's Factory fade out as you get closer to them. If Anisotropic Filtering or Internal Resolution higher than 1x (640×528) is used, the arrows fade out too early. Refer to issue 12047. 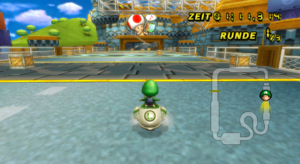 The Arrows fade out too early (5x IR) 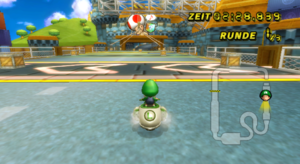 Behavior as on console (1x IR)

Mario Kart Wii HD Remaster Project forum thread The pack on the first page has 87 MB of textures. Walamo15's newer pack (last updated on page 9 at the time of writing) has 635 MB of textures.

Another way to work around the bloom effect issue is by using the Gecko Codes below, which will disable bloom effects.

There is no benefit to enabling this option for the base game, and it can cause crashes if Memory Size Override is enabled when the game/mod does not expect it to be enabled.. However, some Mario Kart Wii mods may want to use increased Memory in order to store more tracks in memory, bigger textures, etc. It is recommended to only enable Memory Size Override when the mod specifically supports it and to follow the guidelines of the mod in order to prevent adverse effects. Increasing MEM1 is known to cause crashes with Online Play.