Grab your friends and family and captain the crew to victory! The party is back and bigger than ever in Mario Party 9 (マリオパーティ9 Mario Pāti Nain), featuring all-new ways to play! For the first time in the franchise, boss battles crash the party and challenge players to compete to defeat a common enemy. In addition, players now travel across stages together in a vehicle towards a common goal - overcoming obstacles, battling bosses, and collecting Mini Stars stolen by Bowser and his minions. Featuring 80 new minigames, adventurous new stages, and all-new ways to play that blend cooperative and competitive action for up to four players, Mario Party 9 is the perfect way to get the party started.

A wrong shadow is being displayed in the minigame "Hole Hogs" if Texture Cache Accuracy is set to fast. It can be fixed by setting it to medium. 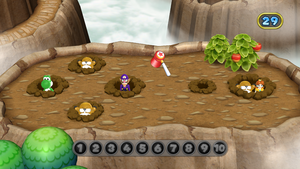 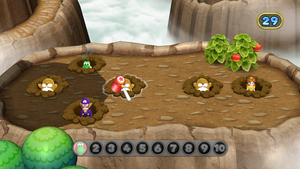 The minigame "Flinger Painting" displays no paint. The results are always 0.00% for all players and always results in a draw. This can be fixed by disabling EFB Copies to Texture Only. Now set by default.

The graph below charts the compatibility with Mario Party 9 since Dolphin's 2.0 release, listing revisions only where a compatibility change occurred.

r5350
Δ
5.0-15571 (current)
Δ
Δ
Δ
Δ
Δ
2.0 (r5384)
Compatibility can be assumed to align with the indicated revisions. However, compatibility may extend to prior revisions or compatibility gaps may exist within ranges indicated as compatible due to limited testing. Please update as appropriate.