Take part in a frantic battle to the checkered flag with Sonic and friends in Sonic & Sega All-Stars Racing!

In a frantic battle to the checkered flag, Sonic and friends speed around tracks set in medieval castle ramparts, lush rainforests and bustling cities, all taken from the visually rich and varied universes of Sonic and Sega. Fan favorites such as Dr. Eggman, Tails, AiAi, Amigo and many more will join Sonic in their custom built vehicles, revving their engines and jostling to stay ahead of the pack. Each character will speed around the track in cars, planes, motorbikes, and in Aiai’s case – a banana mobile! Secret short cuts, swift handling and avoiding strategically placed obstacles are certainly the best way to get to the top of the podium.

But winning is only part of the fun in Sonic & Sega All-Stars Racing! Each character has a specific All Star move – such as Super Sonic, Banana Blitz and Tails Tornado – that allows a quick way for competitors to get back into the race! Power ups and weapons can also be collected around the tracks and used against the opposition to ensure they don’t become a threat to that number one position.

Battle it out in single or multiplayer mode, allowing up to four friends to race in frantic split-screen action, or up to eight players to compete online in the ultimate racing showdown.

The textures may appear blurry or smeared when viewing any 3D models. There is no known fix at this time. 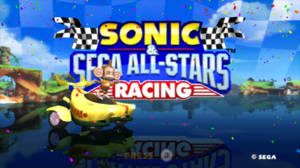 Most noticeable is Aiai's eyes.

After selecting a track to race on, Dolphin sends out a panic handler, but only once per play session. The game seems to run fine after the error message pops-up because Dolphin doesn't crash or hang (This really is an unknown opcode). 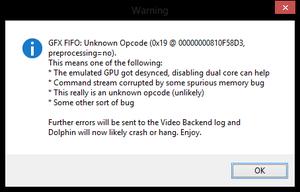 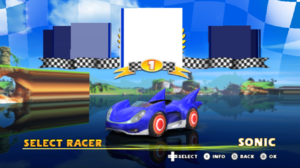 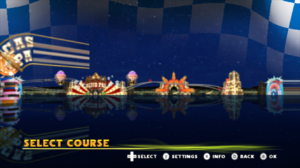 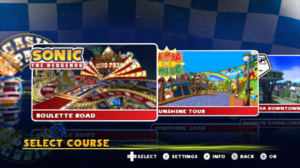 The following AR code will make the game run at 60 FPS instead of 30.

The graph below charts the compatibility with Sonic & Sega All-Stars Racing since Dolphin's 2.0 release, listing revisions only where a compatibility change occurred.

r5128
Δ
5.0-18019 (current)
Δ
Δ
Δ
Δ
Δ
2.0 (r5384)
Compatibility can be assumed to align with the indicated revisions. However, compatibility may extend to prior revisions or compatibility gaps may exist within ranges indicated as compatible due to limited testing. Please update as appropriate.