Capcom's Mega Man has been one of the most beloved heroes ever since his debut on the original Nintendo. Now Game Cube gamers can relive all of the action and adventure of six of the greatest Mega Man titles in the Mega Man X Collection. The first game in the collection is Mega Man X, which debuted on the Super Nintendo. This game introduces gamers to Mega Man X, a new version of Mega Man, and the world he lives in, which is significantly different from the world of the original Mega Man. Having been in stasis for several years after Dr. Light had sealed Mega Man X or 'X' for testing his ability to think on his own. X is awoken by Dr. Cain, several years after Lights death. Cain uses X's blueprints to create a new generation of robots called 'Reploids'. This led to the creation on Sigma and consequently evil robots called Mavericks wit Sigma being their leader. Now X along withg his partner Zero must protect their world from Sigma, an reploid turned maverick that is bent on corrupting the Reploids and using them to take over the world. In addition to the first six Mega Man X games, the collection also includes the US premiere of Mega Man Battle & Chase, an exciting racing game that pits Mega Man against a number of his enemies in a racing game. Of course, no one's going to play fair in their fight to the finish line, which means players will have to be on guard against attacks. Finally, the collection also includes a number of original and sketch art and remixed cuts from the original soundtracks from each game. Mega Man fans can't pass up the Mega Man X Collection, and new gamers will find the anthology a bargain. Six Mega Man X games, a racing game, and tons of extras make the collection irresistible.

Sprites create small gaps and glitches (most noticeable in X and X2). To correct it, set Texture Cache Accuracy to Safe. Now set by default. 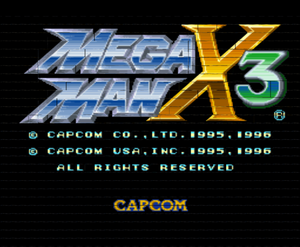 The graph below charts the compatibility with Mega Man X Collection since Dolphin's 2.0 release, listing revisions only where a compatibility change occurred.

r6899
Δ
5.0-18501 (current)
Δ
Δ
Δ
Δ
Δ
2.0 (r5384)
Compatibility can be assumed to align with the indicated revisions. However, compatibility may extend to prior revisions or compatibility gaps may exist within ranges indicated as compatible due to limited testing. Please update as appropriate.