Need for Speed: Most Wanted

Need for Speed: Most Wanted, the new speedster in EA's successful series, combines the tuner customization of Need for Speed Underground with an expanded take on the police chases of the Need for Speed: Hot Pursuit series. The game will feature a Rap Sheet option that works hand in hand with a player's street reputation as they move up from the "Black List" to the A-List. Users will also be able to go head-to-head with their opponents while simultaneously trying to avoid more than six different police cars at once through a dynamically changing open-ended world. Get your car peaked for outrunning the cops by customizing your muscle cars, supercars, tuners, and sports cars.

Need for Speed: Most Wanted has a native 16:9 display option, but it requires enabling it in its internal options and setting Dolphin's Aspect Ratio graphics setting to "Force 16:9". Using the widescreen hack with this title is not recommended.

Need for Speed: Most Wanted uses the VP6 video codec, common in Electronic Arts' titles, causing its videos to have vertical line artifacts and other glitches on many graphics cards. The Software Render will display VP6 video correctly, but is typically too slow. VP6 rendering also reacts poorly to the Force Texture Filtering enhancements (and Anisotropic Filtering on NVIDIA), causing further scrambling. See issue 7193. In 5.0-15515 or newer, this can be fixed with "Manual Texture Sampling" in the Graphics Settings -> Advanced menu.

The halo around the sun isn't rendered. This can be fixed by revising the game INI, Sys\GameSettings\GOW.ini, as seen below. Fixed by 5.0-13743. 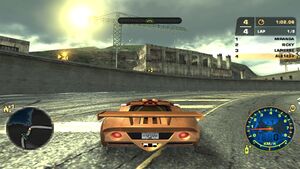 As of 4.0-5310, during gameplay FPS can be incorrectly throttled to over 60FPS which causes choppiness. Using Virtual XFB solves the issue. Fixed with Hybrid XFB in 5.0-5874.

The graph below charts the compatibility with Need for Speed: Most Wanted since Dolphin's 2.0 release, listing revisions only where a compatibility change occurred.

r5558
Δ
5.0-18498 (current)
Δ
Δ
Δ
Δ
Δ
2.0 (r5384)
Compatibility can be assumed to align with the indicated revisions. However, compatibility may extend to prior revisions or compatibility gaps may exist within ranges indicated as compatible due to limited testing. Please update as appropriate.